Over the weekend I devoured Sean Howe’s new, highly-acclaimed book Marvel Comics: The Untold Story (HarperCollins, 2012). It certainly lived up to its billing as a compelling, thorough and no-holds-barred history of the House of Ideas from the earliest days to the modern era, and it makes a fine complement to the essential Tumblr that Howe has compiled featuring unseen photos and graphics from the history of the company.

All of the book was enjoyable, but I was especially fascinated in the details from the 1970s era, when Marvel produced its most self-consciously trippy and strange work (Steve Gerber’s “Headmen” story arc in the Defenders, Steve Englehart and Frank Brunner’s Doctor Strange, and Jim Starlin’s Warlock just for starters). This was the period of my first exposure to comics and it may have warped me for life.

From the business perspective, many of the details surrounding Marvel’s mid-90s brush with bankruptcy were riveting. Howe is superb at simplifying and explaining the arcane behind-the-scenes maneuvering, but he is at his best describing the impact that the economic turmoil had on long-time staff and the company’s overall creative approach.

Howe deserves kudos for balancing an incredible level of geeky detail for hardcore fans and readability for the general audience. Fans of this particular blend of inside-baseball, history and narrative drama should also try to seek out an earlier volume called The Comic Book Heroes (Prima, 1996, 2nd edition) by Gerard Jones and Will Jacobs, which plowed much of this same ground while taking a wider view of the entire comics business during the same period. 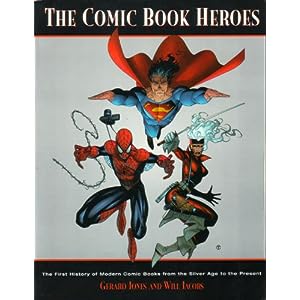 Jones and Jacobs’ story ends in 1996, before the current movie boom led to the “Peak Geek” era of the last few years, but its coverage of the creative and business issues in the comics industry and its ability to ventriloquize the perspectives of key figures in the narrative to illuminate the hidden corners of issues like Jim Shooter’s editorial reign and the ongoing controversy over Jack Kirby’s role in creating the key pillars of the Marvel universe presage Howe’s approach in Marvel: The Untold Story.

Howe’s biggest contribution is to bring that story nearly up to the moment, at least on the Marvel side, with some amazing behind-the-scenes details about relations between Marvel and its shifting cast of owners since the mid-80s. Curiously, there is very little about Disney’s acquisition of Marvel Entertainment in 2009 – a fairly major event in the history of Marvel that took place within the time frame of the book, and figures to have major consequences on both the creative and business aspects of the company. I understand that the Mouse is famously close-lipped about its internal practices, but the role of Marvel within Disney has been the subject of intense speculation since the acquisition and this book would have been a great opportunity to clarify some of those issues for the future. Perhaps that will have to wait for Volume 2.

0Shares
0 0 0
This entry was posted in Books About Comics and tagged comics criticism, Marvel. Bookmark the permalink.